Snow on the Curb 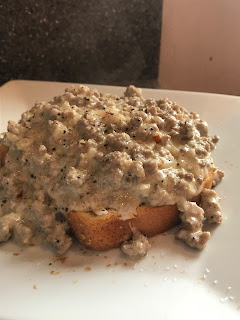 Snow on the Curb...which let's face it, is kind of a 'shit on a shingle' variant. SOS (shit on a shingle) was a staple growing up. It was either a chipped beef gravy OR a ground hamburger gravy usually on toast.

In KC today, it's snowy. I'm not a huge fan. I like it and I think it's pretty for the first few hours, then I'm over it, and I especially don't like seeing the dirty, murky, pushed piles on the side of the road from clearing it off.

It's cold and I wanted something warm and hearty..SOS sounded good, but in an effort to not cuss so much in front of my parrot of a toddler..let's revamp this to Snow on the Curb shall we?
It's SOS over rice on toast-
see...toast='s curb, rice is the 'pretty snow', gravy is the road/gravel/slush. It's not pretty..but it tastes good and it's a good stick to your ribs (or your butt) type of meal to deal with the cold weather today!

Snow on the Curb

For the toast..use what you've got. I used Sara Lee Artesano Brioche (not because I'm that fancy, but it's what we had)-but it did give a nice full and kind of sweet flavor-so I would suggest using a heartier bread to stand up to the rice/gravy. *not sponsored

For the rice..I use basmati and I cook it in a microwave cooker, there I said it.

For the gravy-
1lb 80/20 ground beef, cooked with dried minced onions (1T?)-crumbled and drained (then set aside)

In a good sized pan-
4T of butter, melted
4T All Purpose flour
make a roux...cook above together until it gets pasty/a little golden
Add 3 cups of milk (I used Vitamin D-red lid) and it may not have been exactly 3 cups
Add 4oz of Cream Cheese
stir together
add in the beef/onion mix
add seasoning-
1T black pepper
1T granulated garlic
1t bbq rub (I had it in the cabinet and wanted to add an 'extra' flavor)
1T everything but the bagel seasoning (see above, but I DO like the little textural ads it lends with the poppy/sesame seeds)
1-2T Franks hot sauce
some red pepper flakes..
salt to taste
stir/cook until it's gravy...nice and thick..and coats the back of a spoon *use what seasonings taste good to you..this is what I used, but this recipe does not need a trip to the store for special seasonings*

Toast your bread, then butter it (really..what is toast w/out butter?)
add a half cup of cooked rice
then top with however much gravy you want 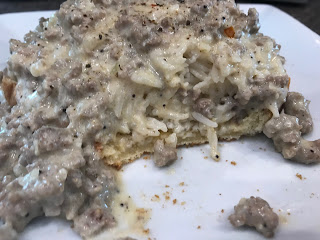 Eat yourself silly, then lay down and take a long winter's nap.