Of Monarchs and Miscarriages

on October 28, 2019
Not a food post, and most definitely not a post that I'd ever thought I'd pen, let alone put out there as personal experience. But here we go.

If you'd asked me last year-I would have (with pride and confidence) told you that I'd raised and released 5 monarch butterflies and was pregnant with our 'book end' baby.
I had no reason to think that despite the fact that it was 'only' 5 butterflies, that I wasn't good at raising them.
I had no reason to feel like the pregnancy wouldn't be just like the 3 successful ones I'd had previously.

But butterfly season ends when it gets cold and seasons change, and sadly so did that pregnancy.
On December 3rd (formally) at around 15 weeks (2nd trimester).
Looking back there was just a lack of feeling. From the time I took the positive test I was getting blasted with the stats of "1 in 4" and carried a hubris of "that's not me, I'm not a part of that club" -I had NO reason to think it would happen, but it was a tickle in the back part of my brain that it "could" (I think that is a normal pregnant person thought, that it 'could' happen). I experienced NO morning sickness. I chalked it up to the fact that my last pregnancy has been rough...I thought I was just lucky this time around and was enjoying myself (imagine that!). So when some lower back pain started, I was thankful it was ONLY that and not puking or my Auto-Immune disease (that I'd been dx'd with when I was pregnant with my 3rd).
Based on my 3rd pregnancy (which had been pretty riddled with issue) and the fact that at the ripe age of 36 I was 'geriatric' they were keeping close tabs...sonograms, heartbeats...it was all there one day...and then it wasn't. The final word on it was a "completed miscarriage".

It wasn't something any of us had prepared for. No prior history, no reason for it, no one to blame..."sometimes these things just happen". It's not a great answer, but it's the only one anyone could give. I was counseled to 'take time to grieve' and to 'wait a few months' before we decided to try again (IF we decided to). It wasn't a question for me..the 'if'. I KNEW there was supposed to be a 4th baby...we weren't done. I was devastated, but undaunted.

In April 2019 I started noticing the monarch butterflies, here and there, on our acreage...and started combing the milkweed daily for eggs and caterpillars. On my first trip out toward the end of April...I came back with 10 eggs! I was thrilled! And I was also blissfully pregnant with my rainbow baby...around 7 weeks at that point.

10 eggs hatched, 10 tiny caterpillars started greedily eating the tender milkweed leaves...
counting daily 1, 2,3, 4, 5,6 7, 8,9, 10...
but then suddenly..1,2,3...what?
Turns out...hungry caterpillars eat hungry caterpillars.
We kept looking for eggs, we kept finding eggs, eggs kept hatching..and by the middle of May we had growing caterpillars that we were grabbing fresh greens for daily! We also learned to keep the tiny babies separate from the older ones to avoid the eating problem...

But I wasn't sick (again). No morning sickness and I was cautiously optimistic and trying not to be paranoid about this pregnancy. The sonogram showed a beautiful little bean...but about a week and a half smaller than my math had thought it should be..and doubt started to creep in.
"Sometimes it's that way, maybe your count is off and you got pregnant later on that you thought, sometimes they catch up quick..."
At the next sonogram that little miracle had closed the gap a bit...and was tracking only about 4-5 days off my count and the heartbeat was strong...and fast at 172bpm. With that I calmed down quite a bit.

On Memorial Day a couple of the caterpillars went into "J" phase and I woke up with a feeling.
I didn't feel pregnant. I felt different. Something was off.
My OB's office was understanding and scheduled me a 'let's calm this lady down' sonogram.
The feeling persisted...I headed to the office and told myself that I was wrong. I told myself that I was being ridiculous, I told myself I was worrying for no good reason, I told myself that it was going to be fine....and then the sonographer took a deep breath and told me she was sorry, but she couldn't find  a heartbeat, and I looked at the screen (even though I saw a perfect little body), the tears came and I told her "I know".
This time it was a scheduled D&C.
This time it was miscarriage number 2.
This time there was tissue to test and tests revealed there was nothing "wrong".

In July we released 11 monarch butterflies. At that time we had anticipated 12..but when the twelfth went into "J"...it's like he got up there..and then changed his mind.
There was nothing different (that I knew of) between that one and the others that had made it...he just didn't. Hard for my mind not to draw a parallel there...

And the sad trend continued. Out of more caterpillars, more getting in 'J' and then deciding it wasn't for them, passing IN chrysalis...the second half of the butterfly season has been a disappointing one.
Then two that made it OUT, but would never fly and would pass quickly and quietly.

It's hard for me (in this season of my life) to NOT compare the two.
Every caterpillar WON'T be a butterfly...
Every conceived baby WON'T be born...

You can do things like you always have, like you know have worked before...and yet you can't guarantee the same results..whether it's butterflies or babies.

I wish that I could wrap this up with some sort of sunshine, some sort of "I survived" motivational quote-but I still struggle. Months of missing the two babies that I'll never have. Weeks of waiting for the caterpillars to change. Days where I get so angry that things weren't different. Moments when I question my faith and my sanity.


I've learned a few things.
That worrying about things just doubles your anxiety about things.
That nature knows things we don't.
That I'm a lot stronger than I ever thought I was.
That I'll still keep  trying....to raise butterflies and babies. 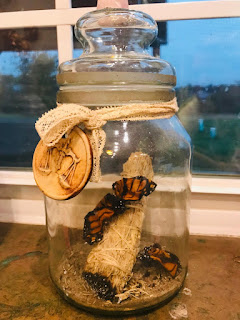