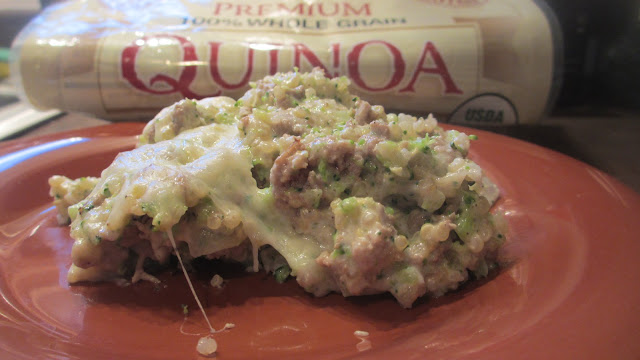 I like quinoa, don't get me wrong, but alot of times I don't exactly know WHAT to do with it. We aren't really a side dish family, so I try to incorporate it when I can. And this dinner was very tasty, and in true Suzy fashion utilized things I happened to have on hand. I'd like to call it healthy since it's got both quinoa AND broccoli in it, but the alfredo sauce and cream cheese might beg to differ, either way...the kids were impressed and ate like little pigs. Neither commenting on the healthy stuff they were eating, just going to town on the cheesy goodness.

1 cup of quinoa-cooked..I'm guessing it turned out to be about 2 cups cooked.
1 lb of ground turkey, browned
1/2 an onion, chopped
1 bunch of broccoli, blanched
1 jar of alfredo sauce
1 block of cream cheese
mozzerella cheese to top, however much you want
salt and pepper to taste

1. Cook your quinoa and put it aside. I cooked mine in a microwave rice cooker. It's the same ratio as rice 2 cup water to 1 cup grain-it took my microwave about 10 minutes. Which to me, beats standing over it on the stove.
2. Ground turkey and onion into a pan, crumble and cook until the turkey is nice and browned.
3. Broccoli. I boiled some salty water and put it in there until it was brighter green, pulled it out and put it into my food processor to chop it into teeny pieces that would kinda mimic the quinoa.
4. Melt your cream cheese into your alfredo sauce, I added some pepper at this point b/c that is how I like my white sauce.
5. Assemble! Mix it all together,then top with shredded mozz, and bake at 350 until the edges get a little brown and the top is nice and melty.