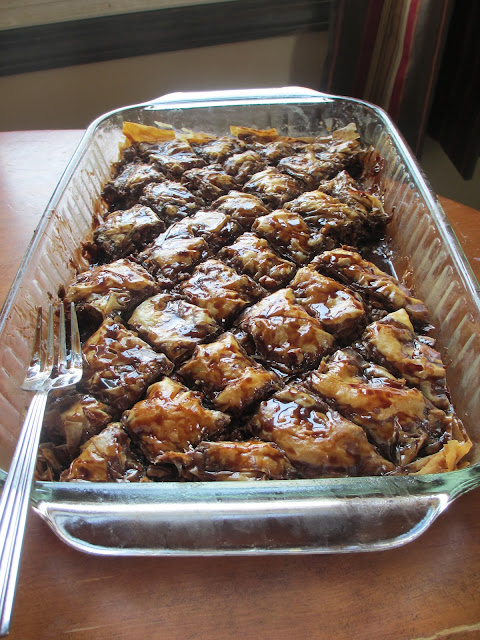 Here is the thing about Baklava. I was terrified of it. I'd heard horror stories of just 'how hard' and 'so many steps'. But then I ended up with some Phyllo dough and I wanted to take on the dragon...and I did.

The batch you see pictured? Yeah, it's the second batch. The revamp. The studly younger son of Big Daddy Baklava.
It's Keifer to Donald, Scott to James, Alexander to Stellan...you get what I'm saying? I mean if there were ANY way to improve upon the original. You get me?

See I made a tray of regular..and it was gone...as in...I cut it and it was out the door. But I had left over syrup and some more phyllo..so what was a girl to do? Well, I had a little on some ice cream. And I had a little in my coffee..don't judge. And then I knew I just had to make more.

Now I will tell you, there are a few steps.
There is some wait time.
But you will be rewarded.
We're going to pretend with the recipe that I did a whole batch of it GC style, k? Just because I used my leftovers doesn't mean I know exactly how much syrup I had leftover.
And I really recommend going to the Ree's site as well because she has step by step pictures, and well, she rocks. The link is right below!

The phyllo and the filling-
you really do need a pastry brush and melt a stick of butter in a bowl.
your phyllo stays in the freezer until the night before, then it goes to the fridge, then about an hour before you are gonna use it take it out and let it come to room temp. My phyllo came in ONE box, but TWO packages, I only used one package.

I worked with all of mine in one pile and buttered them by two.
Brush on butter, two sheets into the pan
repeat-
so you've got 4 sheets of phyllo down in the pan-
sprinkle with the pecans and coconut
top with two buttered sheets
sprinkle
and you go like this until you run out of stuff. If you happen to have 3-4 sheets of phyllo on top, no biggie. Make sure to give the very top layer a nice kiss of butter. I poured my leftover butter OVER the entire thing..just for good measure.
Cut it in the pretty diagonals, open the oven, say a prayer, and let it go for about 45 minutes or until it's golden.

The syrup-
Put your honey, water, sugar, cocoa powder, and vanilla in a saucepan and bring to a boil, then reduce to low.

Once you pull the baklava out of the oven, give it a healthy dose of the syrup. Then go check your email or something. Then give it another good drink of syrup. Now forget about it for awhile. Or at least try to. Give all those crunchy layers and sticky sweet syrup time to really get to know one another.

But who am I to tell you how to handle this relationship...notice there are missing pieces from my batch above and it was not cooled. I can't say that if any of the listed studly sons showed up I'd take my time with them either. *winks*