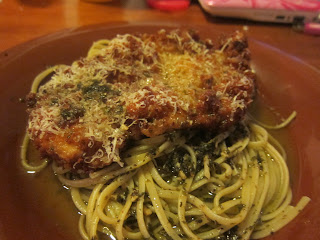 Picture it, Sicily, 1924...
ok..not really..it's more like Kansas City, 2000...not quite as impressive..but wait...
so I'm out to dinner pre Prom and we go to this majorly italian restaurant.."what's good?" and I'm asking everyone-by dinner companions, the waiter, the table next to us. The most 'italian' I'd been was Olive Garden. Other than that it was the occassional lasagna or spaghetti at home and school. But this was the real deal. This was Cascone's.
I ended up getting the Chicken Spedini, and that's where the love affair began. Crispy breaded chicken, doused in this lemony, garlicky, sauce. Amazing.
When reps would ask what to cater to the Dr's office (a few years later) I'd answer with a sound "Get the Spedini from Cascone's". Sometimes they would bend to my will. And when they did it was a happy happy day.
I recently had the great pleasure of becoming friends with a bona fide Cascone, she's absolutely delightful, but totally zip-lipped about family recipes. So I had to come up with it on my own.
I was pretty intimidated by the rolling the chicken thing, so instead I did a milanese prep on it..but it's the sauce that makes it...try it for yourself!

The Chicken-the new edition of Martha Stewart magazine has a milanese article that is no-fail....so I went off of that. I butterflied two chicken breasts, and lightly pounded them out. Then dipped them in 2 eggs that were beaten, dreadged them in plain ol flour, coated them in italian bread crumbs (mine were homemade that I had in the freezer), then fried the chicken in about a 1/2 inch of vegetable oil (I would have used extra virgin olive, but I used it for the Amogio..you'll see) until golden brown. When I took them out I put them on a towel lined sheet (to soak out the excess oil) lightly salted them, and grated some fresh parm/reg over top-then put them on a baking sheet and into the oven at 200. This is more for warm keeping, not extra cooking.

add to a sauce pan, and bring to boil, 3 minutes. Remove from heat.

I served ours over some Lemon Pepper pasta. I put a couple spoonfuls of the amogio over the pasta, then the chicken, then some amogio on the chicken. This is a very flavorful sauce, so you only need about 2-3 Tablespoons full, versus the 1/4-1/2 cup (or more) of spaghetti sauce you might use. Don't make it swim, just splash it a little.

Totally amazing, and tastes so much like an actual pedigreed Italian person made it! :) We LOVED it! I hope you do too!!