on May 18, 2011
I'm talking about zucchini (which I'm always worried I spell wrong, btw). It might just be one of my FAVORITE veggies ever. So versatile, so pretty and green. I love you zucchini! No really...I ate two of them yesterday. Pre-marriage the ONLY time I had zucchini was in bread...and really the ONLY other veggies consumed in the maiden house were potatoes, corn and green beans. After I got married I became more accquainted with the magic veggie. My Mother in Law (who doesn't cook unless she HAS to) makes this dish that is zucchini, onions, tomatoes, and hamburger meat...it's really good. And it really got me hooked on zucchini!
Yesterday's food: 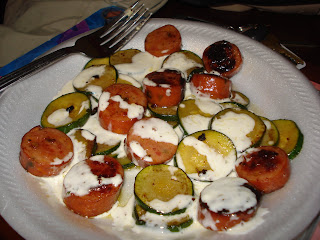 Zuc #1-zucchini and sausage coins with ranch dressing
1 smallish zuc cut into rounds and sauteed up with jalepeno/cheese sausage rounds -the sausage makes the fat, the fat cooks the zucchini 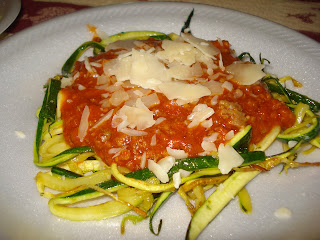 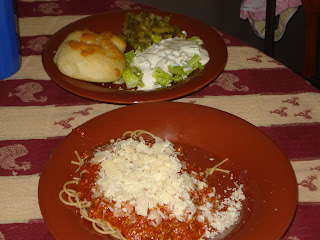 While the rest of the family gorged themselves on the above-Husband's birthday dinner..spaghetti, homemade rolls, salad, green beans (I did eat a salad and green beans)..I had a dinner of basically NO carbohydrates. Yay me! (and down another lb on the scale this morning as well!)
I pinched off a tiny (literally) piece of the rolls I made, and had a sliver (literally) of Husband's birthday brownies (that I'll post soon!)...but other than that..no white starchey carbs for me. And it didn't really bug me. Which is weird..and cool at the same time!

sweetybird09 said…
I love zucchini too!