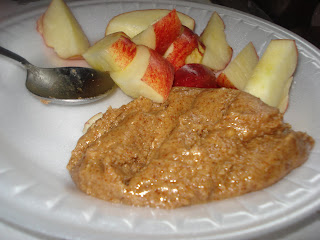 Ok, ok..so it looks like an UNHoly mess...I know...but it's not...it's Heaven...PURE deliciousness.
Renaissance Fair Almond Butter
you'll need...
12 oz bag of roasted and salted almonds
veg oil
cinnamon
Agave Nectar (Honey flavored)
and a food processor...
and some self restraint..of which I have NONE. ZERO. ZILCH.
Because this stuff really DOES taste just like those awesome roasted cinnamon almonds you get at random fairs and carnivals!
Put the almonds in the food processor and let them go until they get really pulverized and start pulling together...then slowly add some veg oil ( I keep mine in a squirt bottle like Guy Fieri does)...add the agave and the cinnamon...then go until it reaches the consistancy you want (by adding more oil).

As pictured, I had mine with some apples...and a fair amount just off the spoon.

Add Your Blog said…
Congratulations! Your blog has been hand selected and
recognized by add your blog.com to receive our - "Blog Star Award" !

Your blog was chosen by our webmasters, to honor your hard
work and dedication in providing a quality web log.
Requirements:
1)Quality Web Content.
2)Great Design .
3)Web Log Everyone Will Love To Read .

Show off our appreciation and display your award on as many pages of your
site as you wish, by following the directions on the link below:

Don't forget to submit your blog to our directory increase your blog
traffic....


Thank You For The Opportunity To View Your Great Blog,