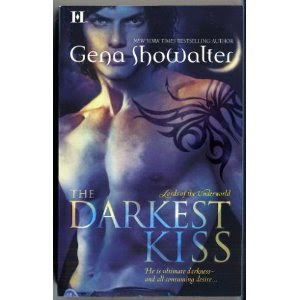 source
I'm a little over a 1/4 of the way in...but I really like this series.
The Darkest Kiss is #2 in the series of "Lords of the Underworld". The basic premise is there were these ancient warriors that opened Pandora's box and each of them became attached (physically, they couldn't help it) to the demons that came out of the box. This book is about the Lord that is Death. The author-Gena Showalter does an awesome job of describing these guys to where when you are reading you can REALLY see what the characters look like. The books have mystery, comedy, suspense, and sex. And if you have the time (as in don't have small children running around that you have to supervise) they are VERY quick reads!