You know what else has layers? 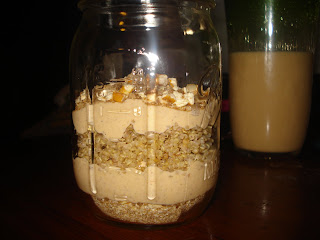 Parfait. Errbody likes parfait. You ever met a person you say "hey let's go get some parfait" and they say, "Hell, no I don't like no parfait." I got the inspiration here. Pumpkin Quinoa Parfaits (very loosley adapted from the above link) 16oz vanilla greek yogurt 2/3 cup canned pumpkin 1t cinnamon 1/4 t ginger 1/4 t nutmeg 3 packets of sweetener cooked quinoa 'crumbly stuff' Layer and devour! Now...let's discuss the crumbly stuff for a second. The original recipe calls for graham cracker crumbs..then I thought that gingersnaps would be good...then I remember that I had a bag of oat/gingersnap/pretzel crumbs from a Strawberry Pie this summer (for the record the pie was AMAZING-but fugly. seriously..my Dad said it tasted great once he got past the fact that it looked like dog puke-thanks Dad.) So my crumbs at the bottom was oats, gingersnaps (for the life of me I keep trying to type gingerspans...geez), and pretzels that got zipped in the food pro. Yum. Ginger and salty pretzel....nom nom nom! And NOW let's discuss Greek yogurt. Um. I kept hearing all these GREAT things about Greek yogurt. Naturally no fat, protein is in there, tastes better than regular, etc. I have TWO glaring problems with yogurt-1)the consistency-I HAVE to mix it with something-the parfait idea TOTALLY works! 2)the TANG. That's why I like Yoplait so much, b/c their flavors overpower the tang. Just know if you haven't already had Greek yogurt (I might be the last person on the planet to try it) it is the epitomy of TANGY. *puckers* However...once you mix the pumpkin, spices, and sweetener in it..it really tones it down. Whew! I really enjoyed this parfait...in fact I'll have another for breakfast this morning! Parfait might just be the best damn thing on the planet.... bonus admiration points if you can name the movie I've been quoting in this post!

Kitchen Belleicious said…
Man- i have been trying to think of what movie you are quoting from but I can;t for the life of me think of it. Oh well- that parfait looks divine- wish you could bring me one! LOL! Thanks for stopping by today and helping me out by leaving a comment!
October 13, 2010 at 11:28 AM