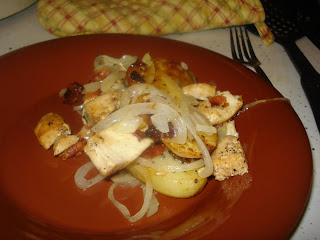 at least that's what it's called in the cookbook...but either way..it was good! I can't remember where I read it/heard it/whatevered it-but the other day it was asked "Do people READ cookbooks anymore?". Um...I do..all the time! Then again when I was a kid I liked flipping through the encyclopedia (I still do actually). When I'm out at the farm I snoop through my parent's kitchen cabinets-my Mom calls it shopping. They are bulk buyers and graciously take me along for the shopping trip (Friday-yay!!) AND give me free range of all their freezers (2 deep freeze), fridges (2 standard) and plentiful cabinets. When it's the end of the month and we're out of groceries..I shop at Mom and Dad's first! So when I was 'shopping' the other day I opened a cabinet and there were cookbooks staring back at me...a bright yellow one with a green binder seemed to pulsate and call out an eerie "yuuuuuuum" to me. I tenderly plucked it from it's hinding place and brought it home..I flipped through the first pages and had to put it down to go to the desk and get my highlighter. This cookbook is a Layfayette, LA cookbook..so it's all kinds of cajun and homecooked stuff...and there is a TON of stuff I want to try in it! However ALOT of the recipes say things like "will easy feed 47,000 people" so I had to cut the portions down ALOT. Is it healthy...Nooooooo, but was it tasty...Yes, I'll say it again...Yes. You need- 3 potatoes (peeled and cut in half-or leave the peels-but cut them in half) 2 chicken breasts 1/2 lb of bacon 1 onion (peeled and sliced-set aside) That's it. No really. That's it... Turn your oven on 350. Cook the bacon until crispy, then remove from pan. leave the grease. Season the chicken (I cut mine into chunks) with whatever you want to-I put cajun seasoning on mine. Brown seasoned chicken in bacon grease (again, NOT healthy)-remove from pan.. leave the grease. Brown potato halves in bacon grease/chicken drippins. 8x8 baking dish..let's layer! chicken potato onion bacon -repeat if you can..if not..no biggie. Bake covered with foil for about 30 minutes. The whole time it was baking I was thinking "where is the wet?" there is no cheese, no soup, no broth...so how is this going to stay moist? It's oven magic..that's all I know. Because this WAS moist. We inhaled it topped with salsa and it will come back to our dinner table soon.

Kitchen Belleicious said…
Girl! You won my lisa leonard giveaway! Are you not pumped! i am so excited for you! Email me at bellecooking@gmail.com and send me your contact info including your name and I will send it to you asap! Love ya and thanks again for all your help and support! Don;t know if I won yet but will soon this morning! Fingers crossed! XOXO Jessica
October 25, 2010 at 5:39 AM