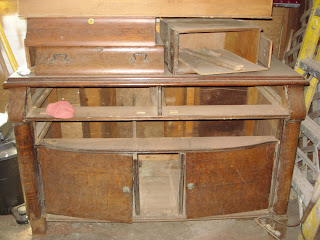 A pretty sad sight huh? But one day--hopefully soon...she'll be beautiful again. The last remnant of my Mom's first marriage. She was rescued from the Ex's inlaws laundromat (say that 5 times fast). This buffet has been a staple of my existence. It's been moved from state to state, house to house, room to room, and it's always been one of my favorite pieces of furniture. Then a couple years ago my brother and sister in law bought a house and took this with them. I was pissed. There, I said it. Pissed. This piece of history hadn't even been OFFERED to me, and boom...there it was..in their house...with a terrible dark stain job. I wasn't happy. However fate had a different idea...from my last post you guys know I fully believe in fate...my brother and sister in law are downsizing and it 'didn't fit in the storage unit'-and the poor baby was dumped, literally in the back of my Dad's pick up truck. He called me-semi distraught b/c he can't move it (he's got mondo back issues), AND they don't have room for it anymore b/c another piece of furniture took it's place. I claimed it then and there, I apologized to my husband b/c I knew it was in a terrible shape even before I saw it, and we went and got it. Right now she's hanging out in my in-laws garage until I can sand her down and paint her. I'm thinking keep the distressed (b/c she is an antique) and maybe paint her an antique white, or maybe even a pale sage. Any DIYers out there have thoughts for me? 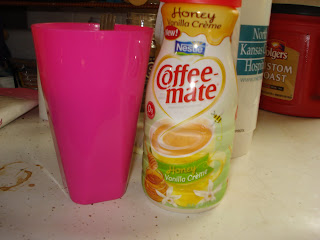 I'm a 2 pink packet sweetener + creamer gal for my coffee...and I'm LOVING this new one from Coffeemate...back in the single day there was a coffee house that I spent so much time in they named a latte after me-it was the Suzy Spice-a honey, vanilla, and cinnamon latte. This creamer really makes me think of it. Gosh I miss that place! They had a German Chocolate Mocha, and a Cinnamon Roll latte that would make your eyes roll back in your head. I probably spent at least $200 there a month....scary huh? Oddly enough they closed about a year after I moved from Kansas City. Rest in peace The Perfect Cup. I've got an extremely squirmy and almost 19lb baby on my lap (well baby check today for Little Man). I'll be back soon with a couple yummy recipes for you guys!

Sweet Sins said…
Suz you crack me up! Thank god you got that piece back! I'm a two pink sweetener and creamer coffee girl too!! I have not tried this one yet but I am going to hunt it down like a stalker on Brad Pitt and give it a try!!
September 21, 2010 at 6:16 AM

Ivy said…
I am going to second the comment, "You crack me up!"
From the ice cream cone comment you left me to this. Anyway, my husband and I are DIYers, however, this is a tough piece. I also like perserving and polishing the already beautiful wood. But you said they already ruined that with an ugly stain. I like the idea of painting it white and then painting it sage over top. Then sanding it in places to have the wood and white show thru. Does that make sense? Have fun and show us when you're done.
September 21, 2010 at 8:29 AM

The Frisky Virgin said…
Aw, I'm so glad you got that piece!!! When it gets refinished/restored, it will be gorgeous again.