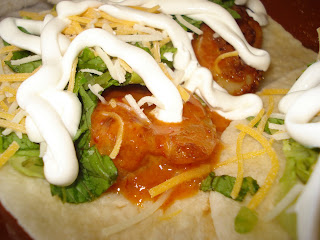 The Frisky Virgin said…
First, that recipe looks so yummy!

Second--LOVE your answers!!! I'm on board with Harry Potter over Twilight. The books and films are outstanding and so much fun. I've just started the P.C. Cast series and I'm really loving it so far. Robbie Williams is great--didn't he do a song or two for the Bridget Jones movies? Maybe I'm thinking of someone else...

Alice in Wonderland is one my all-time favorites, and I adore French Kiss--such a cute movie.

Totally agree on Eric/Edward. lol Although, I may find it difficult to turn Eric down should the ancient one come knocking on my door. ;)

You are absolutely right about fate. The fact that you could have gone in any number of directions, yet something bigger brought you down one very specific road is proof of something I can only describe as magical. :)
September 17, 2010 at 1:25 PM

Stacie @ Imperfectly Healthy said…
You know when I was reading your favorite music I thought you put RobIN Williams - hahaha! :)

And I agree on the Twilight movies - they're just no good compared to the books! And now you have me super-interested in checking out P.C. Cast's books! Also agree on Edward being too moody - wouldn't want to live with him FOREVER!! But I guess Eric really isn't much better - but I find him better looking for some reason! :)

And can you believe I've NEVER read a Harry Potter book!? I actually think I'd really like them, but I've never tried to read one!
September 19, 2010 at 3:28 PM

Kitchen Belleicious said…
Love it! fun to hear your answers! hope you have a great week and the food sounds delish!

XOOX Jessica
http://kitchenbelleicious.blogspot.com
September 20, 2010 at 9:52 AM