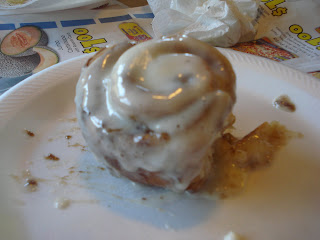 on working THESE babies off! Ok...I did only have ONE...but it might have been the second hardest thing in my life. The first being childbirth. My blogging buddy Heather is who posted the recipe...eep a couple years ago and it's been on my 'to make' list. Well..the wedding anniversary was last week and instead of a cake or cookies...I made cinnamon rolls. This recipe...will now be my go to recipe! They are pretty quick and VERY deceiving...what do I mean? well..I mean that mine didn't proof in the pan that much..so I was scared that we'd be having cinnamon hockey pucks (sadly it's happened to me MANY times before b/c I have no patience)-but it's like these babies were just waiting for the comforting, warm hug of the oven..because once inside...they grew! And they were divine! :) I made two 8X8 pans full....Husband had 2, I had 1. I took a pan over to a friend's house (she's less than 2 weeks from baby time-yay! and he's our go-to guy), and the 4 remaining in OUR pan I shared with Husband's Aunt (my favorite one..sshhh!), and his parents and brother. Get Heather's recipe here....you won't regret it! Another quick anniversary note...we went to Fogo De Chao for our celebratory dinner. Um...WOW! VERY good!!! I'm a huge carnivore..but I could have been totally happy and satisfied with JUST the salad bar! Huge hunks of aged parm, wedges of swiss and manchego, fresh crisp asparagus, onions marinated in red wine vinegar and oregano...lots of different chicken and potato salads...it was just all amazing. And ...their 'cheese bread' they bring to the table....popovers..I'd never had one and now I'm just itching to buy a popover pan and make some at home! They were so good! Then came the meat....I thought I'd be more 'just give me chicken' since I'm not a huge steak eater..but the rib eye was my hands down FAVORITE. None of the meats needed ANYTHING...no sauce, no salt, nothing but a quick cut up on the plate and put in your mouth. Delicious!! If you have one near by, you should go!

The Frisky Virgin said…
Normally, I love cinnamon buns. BUT, just a few days ago, I went to a BBQ, where we ate loads, then followed up with homemade cinnamon buns that night. Oh, I was so sick. As yummy as it was, that cinnamon bun was a huge mistake! lol Pepto Bismol was my BFF that night. lol But, dang, they are so good.
September 2, 2010 at 1:43 PM

Sweet Sins said…
YAY you made them!! I just love this recipe it is full proof and the cream cheese icing is like heaven!! I am so glad you liked them and you didn't get cinnamon hockey pucks!!
September 17, 2010 at 7:22 AM