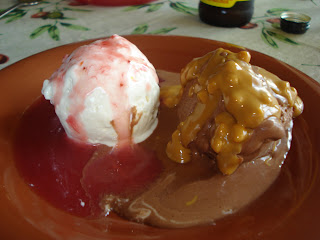 I've always been a fan of phone talking. I think you can 'hear' alot in a voice. And a few years ago when I started my job, it was part of it to contact other office and whatnot and I 'met' someone over the phone. This gal had a GREAT phone voice. Friendly, appropriately funny for someone you hadn't met face to face and even geez 4 years ago I remember getting off the phone and thinking "I like this girl". I'd never seen her, but I liked her. I didn't know her, but I liked her. So our relationship progressed, it's been a long time since we actually called each other at work and had to say who we were b/c we know each others voices. A couple years ago we decided that we should go see Twilight together and at that first 'official' meeting, it became 'official' that we really were a left hand and right hand meant for one another. She's my best friend! And I know friends...I'm fairly selective on who I deem as a "best" friend. In fact besides the Husband there is only one other person that gets that title and she and I have known each other since we were 10. So to get a friend like this now? I'm so blessed! The other night I invited her down for dinner. I know she stalks my blog, and we talk about food, and she's already proclaimed me a 'food expert'. I have been known to freeze half of whatever I made for dinner and take it to her on occassion! So when I knew she was coming for dinner I wanted to impress her even more...so I made ice cream...I made TWO ice creams! They were both awesome!! They went perfectly together...just like the two of us do! So on the left- Cheesecake Ice Cream (from here) 8oz softened cream cheese zest and juice of one lemon 1/2 cup sour cream 1 cup half and half 2/3 cup sugar Combine it all in a mixer until you've got a nice smooth consistency, then pop into the fridge to cool for a couple hours until you are ready to put it in your ice cream maker. We topped it with some homemade cherry syrup. Heaven. Then on the right... Nutella Ice Cream (from here) 1 can of evaporated milk 1 jar of Nutella infinite possibilities... combine in a microwave safe bowl. Nuke for 30 seconds, stir stir stir. And again, nuke for 30 seconds, stir stir stir. Like the spoon..yes, you will. Go after this now with your hand mixer until it gets silky, and it will. Resist the urge to pour the entire bowl down your throat. No! You MUST resist! It's ok to take a sip though...go ahead..I won't look. You done? Ok..put it in the fridge. Seriously...it might be funny, but I'm NOT exaggerating how hard it was for me to not just drink it. Then freeze in your ice cream freezer. We topped our Nutella ice cream w/ melted honey roasted peanut butter. And there are the chills....it was awesome. And then there was the residue on the plate that was cheesecakey-cherry-nutella-and peanut buttery. Frick. Yes..I licked the plate, ok? Both of these ice creams were too easy to make...no cooking, just mix, stir, chill, freeze. My Mother in law fell into the bowl of the leftover cheesecake ice cream and didn't come out until it was gone (she paid for it in a stomach ache the next morning). Literally she said it got her out of bed twice and she was eating it in the middle of the night in front of the freezer. The Nutella Ice Cream..yeah, it's gone too...I rationed it out for a couple nights, then Husband and Little Miss finished it off just last night. So go ahead and make these..you'll thank me later!


P.S. I loved your butter and was so excited to win it! Thank you! When was that? a while ago, I know. At first I wanted to save it forever and wait for the perfect occasion and then one day...I decided to enjoy life and opened it to share with some of my friends, I realized I took no pics to blog about. But you made a wonderful thing and it was most enjoyable. :)
July 2, 2010 at 8:29 AM

Stacie @ Imperfectly Healthy said…
I'm going to try these recipes! They are SOOOO much easier than ones I've been using! Yum!
July 2, 2010 at 11:30 AM

Anonymous said…
I'm happy to inform you that you have won the Star-Spangled Giveaway on the Moogie & Pap blog.

If you would please email your name and address, I will mail your prize out as soon as possible.

Kitchen Belleicious said…
Oh! That looks delicious and after my car ride today I need something good to eat!
July 5, 2010 at 5:35 PM