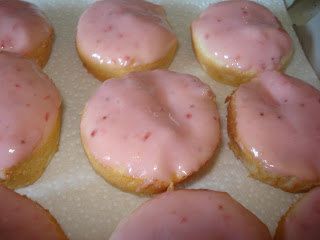 So my best friend's boyfriend...he's like 6'5, long dark hair, big listener of Death Metal...when his birthday came up, I offered my baking services and fully expected something heavy. A rich chocolate cake, or a thick cheesecake....I never expected him to want Angel Food cake...ever. Nor had I ever MADE Angel Food cake...ever. Now I like Angel Food cake..I really do..but it's also one of those baking things that intimidates me greatly. I mean there is a mixing technique, a cooling trick...a little over my head...just like Bestie's boyfriend since he's so tall...but...I told her I'd try...after all we learn by trying right? Birthday Boy ate 10 of them. Bestie had 2. They were a hit! And they were ALOT easier than I thought they'd be. They'll be making more appearances around our house for sure! Oh, and the name...I had to rawk-n-roll it up, didn't I?? Angel Food cupcakes (adapted from bakingbites.com) 3/4 cup powdered sugar-sifted and divided 1/2 cup sifted AP flour 5 extra large egg whites-room temp 1/2 tsp cream of tartar 1/8 tsp salt 1 tsp mexican vanilla Oven at 350 degrees. Spray cup-tin with cooking spray. In a small bowl sift together your flour and 1/2 cup of the sugar In large bowl beat egg whites until they are foamy, then add in cream of tartar and salt, THEN add in remaining 1/2 cup of sifted sugar and beat until it goes to soft peaks. Incorporate vanilla...Then very carefully fold in the flour/sugar mix in a couple additions. Fill your cuptin full of the 'batter' (it's hard for me to call this a batter b/c it's soooo light) (no liners needed) Bake 16-18 or until golden brown and tops feel springy. These need to be inverted to cool..so I took my cooling rack and flipped them (in the/with the pan) onto that and put it on top of a bowl and it worked fine. They sink a little...and that's ok. Once completely cooled...dip in glaze. Strawberry cream cheese glaze 2T salted butter 4oz cream cheese 2 cups powdered sugar-sifted 1/4-1/2 cup strawberries (that I ran through my mini chopper) My favorite thing to do with Angel Food cake is to toast it...yes, I said toast it, as in-in the toaster..then I usually smear jelly on it and eat it like toast...I call it angel toast...b/c I'm cool like that. These little cupcakes are great b/c they have more toasty ratio since they are cooked in the cuptin. And they are SUPER light, so I can really see how Bestie's boy downed 10 easily!!