on June 11, 2010
Yesterday..everything I had was insanely good. And yes, I know it's terribly egotistical to heavily compliment my own stuff..but I was just so dang proud of everything! Not esp proud of the amount I consumed..but still! 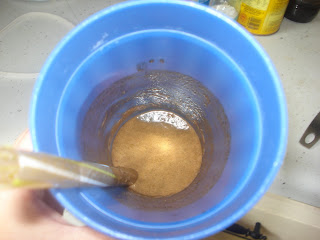 It started out with a GM...my favorite so far..I know, I know..I say that EACH time I come up with a new one..but this one was awesome! Baby spinach + frozen banana (those are my standard things that won't change from now on) Then a scoop of Amazing Grass (I'm still on the fence taste wise, but it's really good for you.) that I disolved in 12 oz of hot coffee (I'm so in love with my Keurig!) and a large spoonful of Nutella. Notice that the cup is almost empty? It's because I couldn't help but CHUG this thing! If I hadn't have been scared at what the excess caffeine and double dose of spinach would do to my stomach, I would have made another and more than likely drank it JUST as quickly! But let's talk about dinner a little bit... Once upon a time I lived in TX. East TX, where winter lasts a day, where the southern accents resonate through the magnolias, and where TRUE beef brisket lives. TX is the brisket capital. And ok...I live close to KC, MO where people hail the BBQ...but my heart with ALWAYS belong to TX when it comes to BBQ. So...with that being said I'm terribly disappointed with most of the brisket I try around KC. It's sad but true! I mean when you were raised with the best, the standards are high! I also am/was terrified to try to cook my own! But last week at the grocery I decided I'd try it. I bought the smallest brisket I could find (trimmed) and only spent like $8 on it. I asked coworkers about cooking, and I'd watched a couple shows on Food Network, so I had a general idea of what I wanted to do. I put steak dust all over it and let it sit in the fridge for a night. Then yesterday morning I added some water, granulated garlic, black pepper, and liquid smoke-covered it with foil and let it go at 200 for about 4 hours, then 250 for about 5 hours. I took the 'juice' from the bottom of the pan, strained it into a saucepan and added some brown sugar, ketchup, and apple cider vinegar and let it go for a little bit. And I couldn't very well have this brisket w/out another southern favorite of mine..so I cooked new red potatoes with fresh green beans and an onion in a little bit of water and a lotta bit of lard (you have to, really). This goes into my Top Ten of BEST MEALS I've ever made. I have to giggle a little b/c the portion on the plate looks reasonable...you don't see that I was eating out of the pans before actual 'sit down dinnertime'. *snickers* 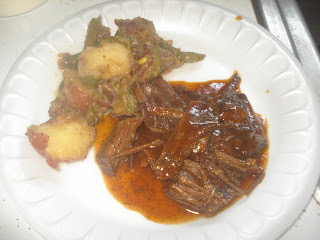 I had to have something sweet too...so I made Angie's Honey Bun Cake...it's eyerolling good!! 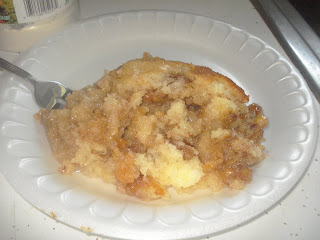 The only thing that is left today is a tiny piece of cake...sad really. But it was all SO good.
My Mother in law (the family was over for dinner last night) hates to cook and wants to pay me for groceries and to make them dinner at least a couple nights a week now...I 'guess' you can call that a catering gig right? Helps her out b/c she HATES to cook....but she loves the stuff I make!
Also..I had a couple other things that I'd made this week that should have been posted before this...but I couldn't wait. :) I'll post the others later!
Happy Friday! Today is more putting laundry away and trying to wrangle the 2 year old..I had a GM for breakfast (This time with honey almond yogurt and coffee+ag)..not sure what is for lunch and dinner, but doubtful that it will top yesterday's meal!

Angie said…
I am so glad you liked the honeybun cake!! It is courtesy my friend and co-worker, Whitney, who is also a dietitian. I'll have to pass on that you enjoyed it!!