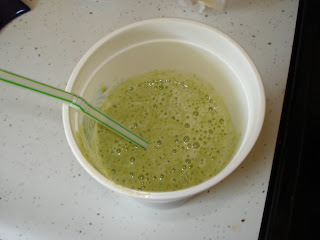 I'm still on my GM kick. It's been my breakfast EVERY day this week. I'm thinking I should celebrate that..but I'm not totally sure. :) This one though...I might have found my match for a little while. I feel a bit like a crazy inventor, trying up different concoctions, and some of the GMs I've made I've enjoyed, some I've just liked, and some I won't make again. Keep in mind it's not the spinach's fault b/c you can't taste it..I just messed up the consistency (to thick) on some. I've also added Amazing Grass to some and I'm not quite used to it's flavor yet. But this GM. LOVE it. It's been the breakfast 2 out of the 7 so far. :) 1 frozen banana 1 cinnamon apple sauce (the little container, I'm gonna guess it's about 1/2 cup?) 1 t honey dash of cinnamon milk 2 handfuls of baby spinach. Yum. Again, I say YUM. That and half of my daughter's oatmeal and I'm 'full as a tick' (ew, I hate that saying, but my Dad uses it all the time-he's from Arkansas).
applesauce banana Green Monster