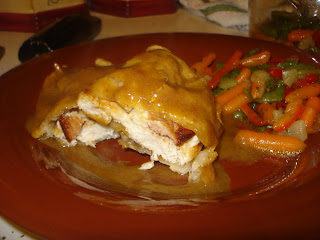 I don't have exact measurements for you for this recipe. I mean, alot of things just aren't 'exact' with me. I can tell you each component, and try my best to explain HOW I put it together though b/c it was delicious! List of stuff- *boneless skinless chicken breasts (amount will vary as to how many you want to make...I made 6, so I used 3 breasts and butterflied them) *puff pastry *6 slices of canadian bacon *6 wedges of original Laughing Cow cheese *chicken broth *spicy mustard *honey *half and half *butter *random seasonings-salt, pepper, granulated garlic, Tony's cajun *flour -What I did: Butter in a saute pan and seasoned up the butterflied chicken pieces with seasoning and cooked those up-set them aside Cut the slices of Canadian Bacon in half (little half moons) and browned those a little in the same pan. Let the proteins cool just a bit while I rolled out the puff pastry-then made my little 'packages'-chicken, then the Canadian Bacon, then I cut the LC cheese wedge in half and put that on top of the bacon, then wrapped it all up in the puff pastry. I tried to make it look pretty and didn't really succeed. (My Mom always told me, if you must suck, at least succeed-*eyeroll*) I put those 'packets' in the oven (on a baking sheet lined with a piece of parchment) at whatever temp the puff pastry box told me..I think like 425 until the pastry was a pretty golden color. While those baked- My saute pan was a nummy little landmine of goodness...so I added some (I'm guessing here at maybe 1/2-3/4cup) of chicken broth to 'deglaze'-erm...scrape up the bits. But then it just tasted ok...so I added a splash (again, guessing maybe 1/8-1/4 cup) half and half to give it body (like I knew what I was doing). But it still didn't have much taste. That's when I went a little crazy and decided to try to make a Honey Mustard gravy. Which sounds terrible and sick. But I thought it sounded good with the quasi Chicken Cordon Blue/Bleu. Stick with me here...at least if you like honey mustard with chicken...if not...just thicken this as is and pour over your chicken packets and be done...if you DO like the idea...add (again..guessing 1/4 cup?) both spicy mustard and honey to the gravy and whisk. Mine didn't thicken up like I wanted it to..so I did a Beurre manie'. That's about the fanciest thing I did..and I think I learned it off the Food Network years ago (I think Giada?) and I prefer it to cornstarch. I topped my out of the oven chicken packages with this gravy. It was good. That's what I'm saying. And it wasn't just ME saying. My Mother-in-law basically had a food-gasm AT the table, and my Father-in-law was just as equally impressed. My Husband ate it, then said he didn't like it. As in he ate TWO of the packages, then 5 minutes later tells me..I didn't really like it. 1. If I depended on him for recipe creativity I'd never get anywhere. 2. 4 over 1 wins-I liked it, as did the 3 in-laws (my bro-in-law was there too) that were at dinner. So we win! I apologize for not having 'exacts' for you...but I can tell you it was exactly delicious! And...I'm thinking well..I did it semi-healthy too..go me! :)
cheese chicken

Ivy said…
What a lovely dinner recipe. I will try this next time I make chicken for dinner.I like baon better though instead of canadian bacon.
March 12, 2010 at 9:55 AM