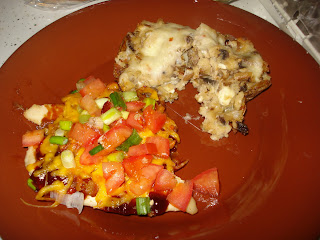 This dinner was soooo good. Seriously. Another blog I routinely stalk is The Open Pantry when she posted this chicken..I was drooling! I'll just link you to her original recipe! The only thing I changed was that I had chicken TENDERS on hand and thawed instead of chicken breasts. The potatoes however...well I can take credit for those! Are they as pretty as the chicken? No. Would you have even known they were twice baked potatoes if I hadn't told you..eh..probably not...but they were and they were awesome! Suzy's Steakhouse Twice Baked Potatoes- oven at 400 4 baking sized white potatoes scrubbed clean 1 onion-sliced 1 package of white button mushrooms-sliced 3 Tablespoons butter 1 Tablespoon oil 1/4 cup bleu cheese crumbles 1/4 cup shredded pepper jack 3 oz cream cheese-softened Splash of Worchestire sauce I think that is all that went into them. :) I pre-'baked' my potatoes in the microwave for about 8 minutes until they were scoopable, but not done. I cut them in half and scooped them out and turned them upside down on a baking sheet and put oil on the skins and cooked them off for about another 15 minutes while I made the filling- I sauteed the onion and mushroom in the butter until they were ALMOST to the carmelized point...I wanted them all soft and sweet..and they were. When they were as done as I wanted them to be that is when I tossed in the W sauce. Even though we weren't having steak the mushrooms, onions, and bleu cheese was too steaky for me to NOT throw in the W. Um..where was I? Ok..let the veggies cool..but just a little..and toss them into your potato that you scooped out earlier. Also put in your cream cheese...now if you wanted to stop here. You could. You really could. I mean you've got potatoes, veggies, and cheese. So go ahead and bail now, fill up your potato skins and enjoy. However...have I ever told you I was born in WI? Well I was...but we moved to TX when I was 3 weeks old and I've never been back to WI....however it didn't take long for the cheese to sink in...I think I was born with it. I LOVE cheese...so I went ahead and tossed in the bleu and the pepperjack (I LOVE pepperjack!). So Suzy's Steakhouse Twice Baked Potatoes could very easily be Suzy's Steakhouse 3-Cheesy Twice Baked Potatoes... The oil on the skins should have made them nice and crispy so take the filling and fill away...oh and top with just a sprinkle of pepperjack for good measure..and put back in the oven for about eh..15 minutes. You see..the above rambling paragraph is why I prefer to just copy and paste stuff. I doubt I'll ever accomplish a real cookbook b/c my writing style is more steam of what's in my head...but so is my cooking style. :) I hope you enjoy this meal as much as we did! The tomatoes and the green onions REALLY make the chicken as much as those hidden little bits of bleu cheese add SO much to the potatoes. Enjoy!
chicken potatoes

Unknown said…
oh my, that looks divine. thanks for visiting my blog, and, it's nice to "meet" you. i shall come to yours for cooking inspiration. i'm a *gasp* hamburger helper kindof gal.
January 25, 2010 at 8:58 PM