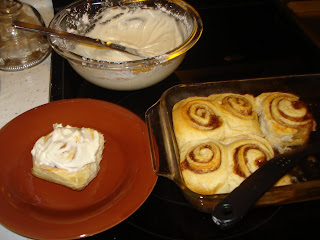 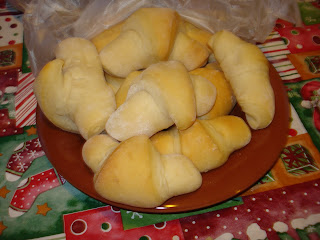 By friends I mean cinnamon rolls. :) The recipe for these wonderful rolls tells you to divide the dough into thirds. With the first two I made cresent shaped rolls, and with the last third I made cinnamon rolls for Christmas morning.
Now I've never had much luck with bread making..unless it's actually in my bread maker and it's just a dump the ingredients and close the lid deal. So when I decided to make rolls for Christmas Eve dinner...I was nervous. But I'd been eyeing these babies on a blog I stalk (My Kitchen Cafe .. trust me..you'll become addicted too) and she makes it look so easy.
Bread lesson that is important to learn. BE PATIENT. Not my forte. I was seriously peeking under the towel to see if the dough had risen about ever 15 minutes. I even updated my facebook status to "praying the dough will rise".
It did rise...and the rolls turned out wonderfully.
As did the cinnamon rolls the next morning!
Since I did these directly from her blog and didn't make any changes, I'm just linking you to her for the Lion House Rolls recipe.
Again with the 1/3 of the dough I did cinnamon rolls. I rolled out the dough and filled with with a mix of-
1 stick melted butter (I use salted)
1/4 cup brown sugar
1 T (or so) of cinnamon
I made a paste of that and spread it on the rolled out dough, then rolled it up, and cut the rolls.
The frosting for the rolls was-
1/2 block of cream cheese
1/2 stick of butter (again, salted)
1 cup of powdered sugar
healthy splash of milk
*the cinnamon rolls I actually let sit out in the warm house overnight and they puffed up beautifully, and had great texture!
*the dinner rolls were great, but I think next time I'll REALLY try to be patient and let them rise a little more.
bread