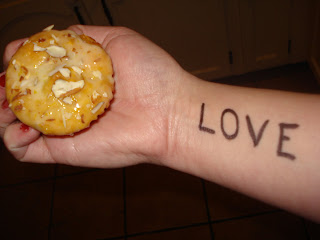 TWLOHA is why I have it written on MY arm..check out the link if you want to know more. In my hand...is a delicious cupcake! You see I'm suffering from something OTHER than just being pregnant...my sweet tooth is broken. Yes...it's sad, but it seems that this new kid that I'm growing just doesn't have a fondness for it like I do. But I have a cupcake rule....I have to try at least ONE of whatever new cupcake I make. If I've made it tons of times, I can skip..but new recipes require me to eat at least ONE (and I try to shoot for ONLY one)....I've stuck with the only one rule with these, but if I let myself I could probably inhale a whole dozen! Onto the recipe! Orange-Almond Cupcakes (recipe from Cupcakes! From the Cake Doctor-Anne Byrn)

Prepare filling-crumble the almond paste and add the sliced almonds (my paste didn't really crumble so much as it did get more of a silly puddy consistency, but I think as long as the almonds are distributed throughout you should be ok)

Prepare the cupcake batter-put all ingredients (for the cupcakes) in the mixer-let it go for 30 seconds, do a scrape down, then let it go for about 2 minutes more. Should look pretty smooth and thickened. Remove 3/4 cup of the batter and mix that into your almond paste/almond mix in your separate bowl.

Fill the cupcake liners about 3/4s of the way, then spoon a heaping teaspoon full of your almond paste mixture into the centers.

Put on baking rack to cool.

Ok..here is where this one differs for me. You'll strip these ladies. Nope..truth. That's what the recipe says..well..it doesn't say strip them..but it does say to remove the liners. Which is MUCH easier to do when they are cooler (they don't tend to crumble) and since you won't have good luck glazing when they are hot or even warm, it's best to let these little beauties TOTALLY cool, then strip them, then dip them. (for the glaze you just mix all your stuff together)

The book says to drizzle the glaze in a criss cross pattern. I'm more of a dipper and less of a drizzler..so I dunked the tops. Twice, then topped with sliced almonds.