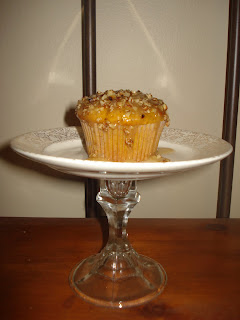 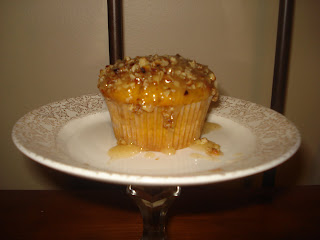 So I actually made it this time...I think that part of the deal this month was that we're supposed to give the cupcakes some sort of neat Halloweeny decoration..to make them "Boo-tiful"..but I opted to just make it yummy looking!
Pumpkin Poundcake with Butter Pecan Glaze (adapted from southernfood.about.com)
Cake:
3 cups ap flour
2 tsp baking powder
1 tsp baking soda
1/2 tsp salt
2 tsp cinnamon
1/2 tsp ground nutmeg
1/2 tsp ground ginger
1/4 tsp ground cloves
2 sticks butter
1 cup sugar (white granulated)
3/4 cup brown sugar
4 large eggs
1/4 cup veg oil
1 can (15oz) pumpkin
1 tsp good mexican vanilla
Preheat oven to 325
Mix first 8 ingredients in a separate bowl...whisk to combine
Cream butter and sugars, add eggs one at a time, add oil, pumpkin and vanilla
Add flour mixture (I took three scoops to incorporate)-mix until smooth and blended.
Put into cup liners, put in the oven...
and here by my own admission is where I messed up. I adapted this from a bundt cake recipe that you are supposed to bake about an hour...I looked at the clock when I put these in, then in what I thought was about 10 minutes, then what I thought was about another 5..when I realized the clock hadn't moved...and the battery was dead. Frick. So uh...keep an eye on these..I'd guesstimate them at about 35 minutes..but you know the drill..until you toothpick test them clean.
Glaze:
4 Tbls butter
3 Tbls heavy whipping cream
1/2 cup powdered sugar
2/3 cup toasted, chopped pecans
In saucepan melt together butter and cream and bring to a boil, let it boil about a minute, then whisk in the powdered sugar.
Let this sit about 15-20 minutes to thicken up a bit.
Once my cupcakes had cooled down, I just double dunked the tops in the glaze, then dunked the wet tops in the toasted pecans.
Reviews:
Husband-thought the cake was a little dry, but admits he thinks ALL homemade cupcakes are dry and prefers I just make cupcakes from a box mix (*gasp*)
Male Coworker #1-really liked them. Thought they were very seasonally apropo
Male Coworker #2-just shoved it in his mouth, gave me a thumbs up and nodded
Male Friend-Ate one at my desk and took one for the road-really liked them..didn't think they were dry.
Best gal pal-"the glaze was perfection" ='s she really REALLY liked them. (and hers had actually been dropped and transported by Male Friend whom she works with)
This cupcake IS for a contest and all the fun stuff about it you can read about here!
Now I gotta scoot and get this entry formally in before the deadline!
cupcake hero


We bumped into your blog and we really liked it - great recipes YUM YUM.
We would like to add it to the Petitchef.com.

We would be delighted if you could add your blog to Petitchef so that our users can, as us,
enjoy your recipes.

Petitchef is a french based Cooking recipes Portal. Several hundred Blogs are already members
and benefit from their exposure on Petitchef.com.

To add your site to the Petitchef family you can use http://en.petitchef.com/?obj=front&action=site_ajout_form or just go to Petitchef.com and click on "Add your site"

grace said…
pound cake cupcakes is an awesome idea, and these are PERFECT for the season. my favorite part of all, of course, is that awesome glaze. how unique and delicious!
November 12, 2009 at 6:54 AM