on September 29, 2008
Anyone watch Grey's Anatomy? More over does anyone remember the first season? Specifically Episode 8 (the cupcake episode to me, actually it's called "save me") Izzie: "Eight hours, 16 ounces of chocolate, and 32 cupcakes, and they still don't taste right." She finally breaks down and calls her Mom at the end of the episode and learns that her Mom puts in a little coconut extract and that's what makes them special. So when this month's Cupcake Hero challenge was Baker's Choice...I chose Cocoa and Liquor... and I named them "Dizzy Izzie Cupcakes" Izzie for the GA reference, and Dizzy since they have rum in them! (notice the cuppie is partially undressed...homage to Grey's b/c they are always sexin' it up) 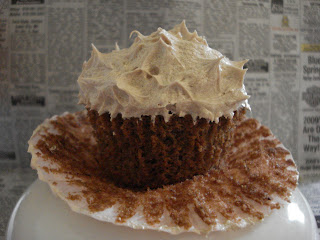 Thoughts: Well..husby and I are trying to watch out for the sweet and the carbs, so we split one:

Husby says "WHY did you have to make those?!"(it was a good thing) it was hard for him to not go back for one full one of his own! He even liked the icing..and he doesn't normally do icing.

Me: I liked my 1/2...although it was more like a 1/4 of a cupcake..actually I had a good deal of the cupcake batter...it was irresistable. I'm hard pressed NOT to like it if it involved coconut and chocolate!

The rest of the Dizzy Izzie's got packed up. Some went to the inlaws, one stayed home for my Mom, and the rest came here to work where they are already being gobbled up!

grace said…
i love grey's anatomy, and i think your reference is spot-on! that was a great episode, and these are stellar cupcakes. clever name too. :)
October 3, 2008 at 2:01 AM

Cakespy said…
I don't usually watch that show, but I think I could become a fan if it inspires deliciousness like this!! YUM!
October 10, 2008 at 9:52 AM