on June 10, 2008
Lately..I'll admit it..I've been drinking a bit...but not to excess and not irresponsibly. My current favorite drink...The White Russian. Kahlua, Vodka, half and half on ice..it's the perfect ending to a hard day! But what is better than a drink? A cupcake!!! So.....I present to you...The White Russian cuppie! 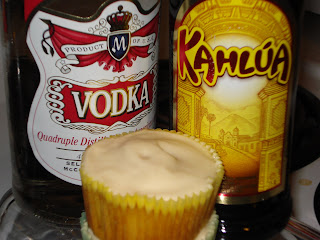 The cake part: 1 box white cake mix 1 small box vanilla pudding mix (I used instant) 4 eggs 1 cup vegetable oil 3/4 cup water 1/4 cup vodka 1/4 cup Kahlua You know the drill for cupcakes...line your cup-tin, fill 1/2 full, bake at 350...I baked them about 20-25 minutes (or until my butter knife came out clean). This made about 40 cups for me. Once cooled... The syrup part: 1 cup of sugar 1/2 stick of butter 1/4 cup water 2 tbl Vodka 2 tbl Kahlua Combine in sauce pan sugar,butter, and water-and bring to low bubble over medium heat. Take off the heat and add vodka and Kahlua and mix in. At this point I put my syrup in a 4 cup measure for easy pouring. Once your cups have cooled..poke holes (I know...defamation!) in them with something..(I used a fork), and pour about a tsp at a time over the cups. I think in the end each cup of mine got about 2tsps of the syrup. The frosting part: (my best attempt..remember I'm still at novice level when it comes to this cupcakey business and I don't quite have the frosting down..but I think it is of supreme importance!) 1/2 stick of butter 3 cups of powdered sugar 1 tbl vodka 1 tbl Kahlua and about 2 tbl of milk (I tried to follow the buttercream recipe in my Betty Crocker w/the variation of adding the alcohol...and only had about 3 cups of p. sugar..so I had to improvise...please use whatever frosting you excel at..but just add the v&K for the kick. ) Once the syrup has soaked in, go ahead and frost away. WARNING: sticky sticky!! Not that it's really a bad thing...but you'll be licking the tips of your fingers after you eat them! So there you have it. I hope you enjoy them as much as I did!! Being such a fan of both of the liquors involved I thought they were awesome...the syrup gives the cake a wonderful buttery..almost toffee-ish. Husby thought they were ok...but then again if I make anything other than something chocolate based, he just thinks it's "ok"...so we can't really take his word for it! He has NO cupcake imagination!
cupcake