on March 06, 2008
At the prompting of my new blog pal "I Heart Cuppycakes", and to get rid of MORE of the stuff in my head..here is a foodie blog!

So I have the daily b*tchy blog at a locked up xanga, and I have the baby blog...but for those of you who neither want to hear my daily complaints or hear about my baby stuff..here is something to chew on. :)

FFFFOOOOOOOOOOOOOOOODDDDDDD! That's right ya'll we all eat it, we all love it, so this site will be linked to all sorts of OTHER yummy sites, and will include some of MY yummies as well. So bon appetito' as Mario Battali would say! 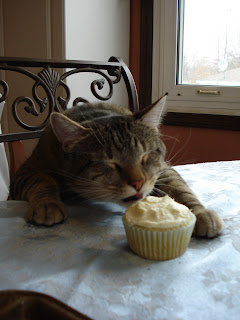 So to get off on the right paw, er foot I have to share this picture, and recipe. AND I submitted this into Cuppycake's "Fierce cupcake competition" so if you want to go to her site and nudge her to help me win..feel free!
Let me introduce you to Trump, my husband's son. No really. The cat THINKS he is a person, he really does. He routinely sits at the kitchen table while my husby and I have dinner, and sits like a person..sorta...anyway..not the point of the post..back to the food. I'm 'whoa' pregnant right now, and since the kitchen table is lower and bigger than my counter I've been utilizing it alot for whatever it is I'm cooking. I'll usually mix and pour at the counter by the stove...but I'll ice and cup pie (those to come later..I know you are drooling already) on the table. Trump has been known to sneak bits of pie crust..so when I was icing my cupcakes and he was sitting there, ever so like a little gentleman, I couldn't help but want to try to snap a picture, and he was more than happy to oblige. *disclaimer* I did NOT let the cat eat the cupcake, I let him sneak a lick from just this one, then I gave it to husby to try out. He didn't mind the lick.
So enough about him...let's get to the good stuff...really.
Lemony Surprise Cupcakes! (taken and adapted from http://www.cdkitchen.com/)
1 cup sugar
1/3 cup oil
2 eggs
1/2 cup milk
1 1/2 teaspoon lemon extract
2 cups flour
2 teaspoons baking powder
1/4 teaspoon salt
1/2 cup raspberry jam

Preheat oven to 350ºF. Place 12 papers in cupcake tin and set aside. Stir together sugar, oil, eggs, milk and lemon extract. Stir together flour, baking powder and salt, and add to liquid mixture. Mix together briefly. Place large scoop (about 1/8 cup) of batter in bottom of each cup. Place one teaspoon of jam on top and follow with another scoop (about 1/8 cup) of batter, completely covering the jam. Bake for 20 minutes.

Just know this....Lemon Extract and Lemon Flavoring..although in similar bottles NOT THE SAME THING!! I used Lemon Flavoring..b/c that's what I had (um, that's what was on sale) and so the batch of cups I made where not lemony at all...sadly. B/c I do so love lemon.
I used a basic shortening icing recipe out of my Betty Crocker for the frosting...threw some lemon flavor in there as well to try to up the lemon factor. I liked the frosting (so did Trump)..and I think that with the flavors in the cupcake you really do need to stick to a "lighter" frosting..I think a buttercream would have been waaay to heavy.
Overall...they were "ok". Husby thought they were too "foo-foo" but then again he's more of a 'give me chocolate or give me death' kinda guy. The girls at the Goddess Gathering I took them too raved over them though. Granny's homemade raspberry jam is really what saved them from just being plain white cupcakes with just a mere hint of lemon.
I'll try the recipe again, and I'll let you know if it turns out better next time!

How To Eat A Cupcake said…
Ohhhh that cat is so adorable. I love cats. Give him a hug for me!

How To Eat A Cupcake said…
I agree! Frangelico and Nutella aren't cheap.